Next Regular Meeting of Tudor Lodge

RHQ The RLC is delighted to announce that Her Majesty the Queen has graciously appointed Major (Retd) Harry Lomas MBE BEM FIH as the Honorary Colonel of 167 Catering Support Regiment The Royal Logistic Corps, with effect 1st March 2021.
Throughout his career, Colonel Harry has worked as venue manager at the 2012 Olympics, Executive Head Chef at the Grove Hotel and also as Head of Culinary with Delaware North at Wembley Stadium.
Welcoming the Honorary Colonel to the Regiment via a video call, the Commanding Officer, Lieutenant Colonel Jo Young said: “With his background, experience and passion for catering, Colonel Harry will be a superb ambassador and role model for both the new recruits coming in, as well as the more senior members of the Regiment. He has a depth of military and civilian catering knowledge and a remarkable network within the culinary industry which he plans to mobilise to the benefit of the Army Reserve Chef. We are looking forward to working with Colonel Harry to reinforce the unique position of the British Army’s only Regiment of Chefs”. 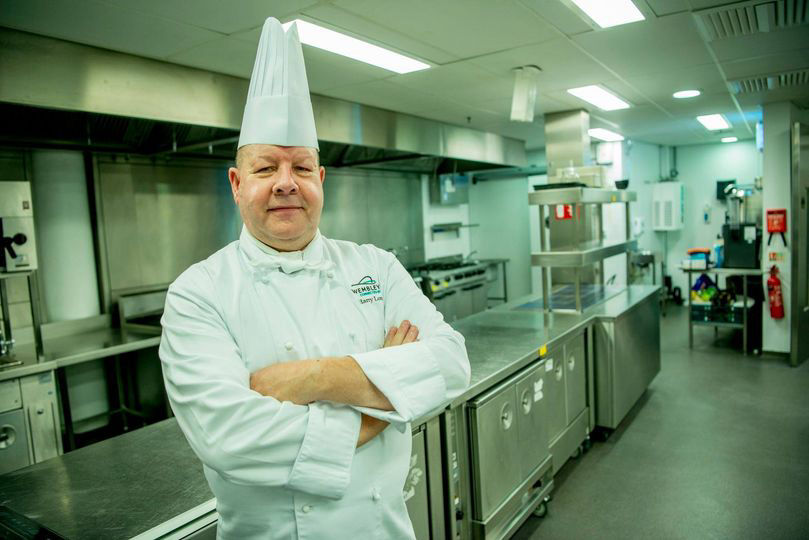 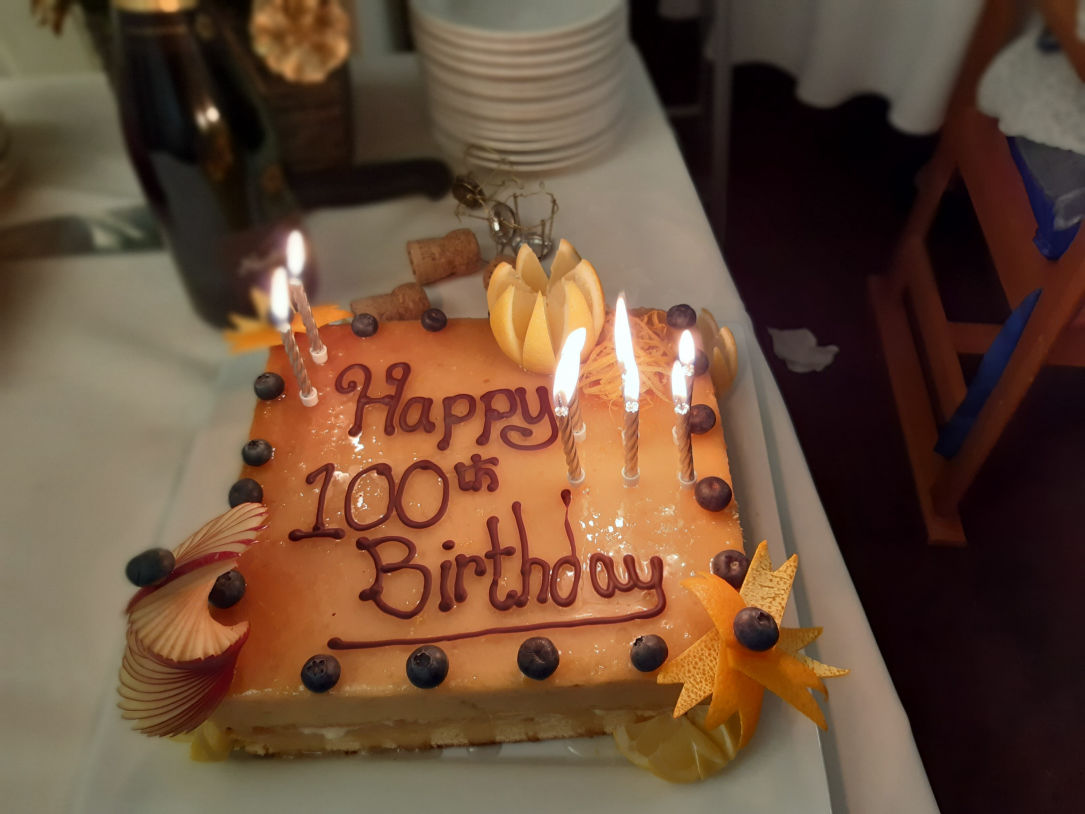 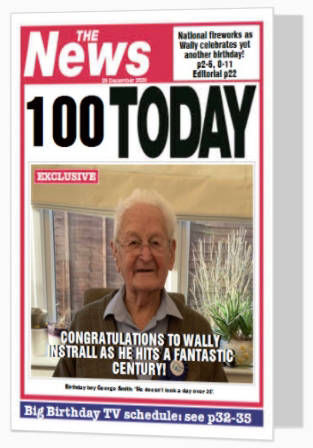 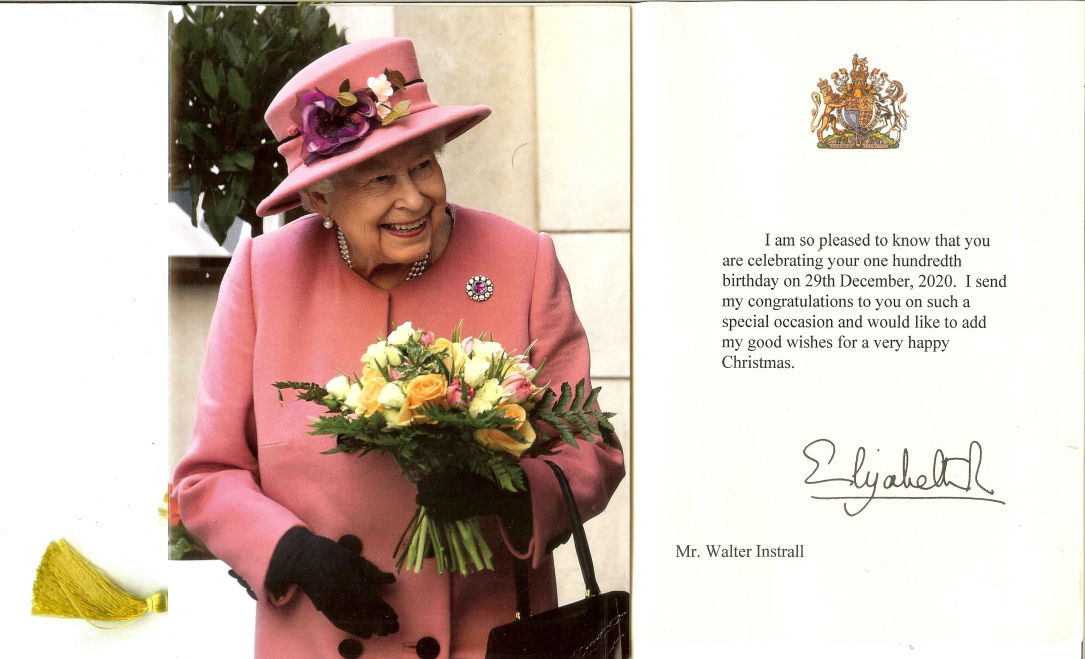 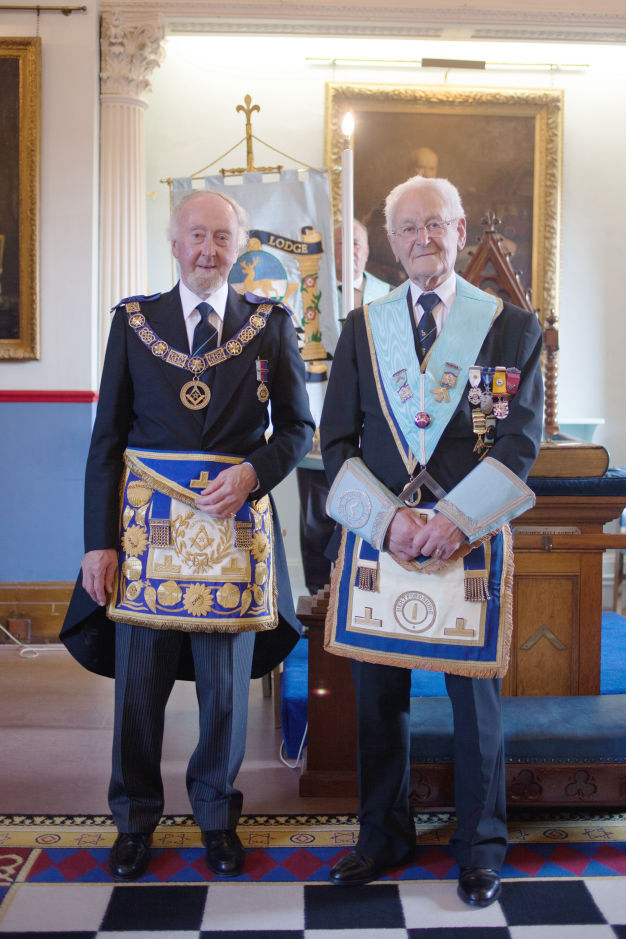 Wally as Worshipful Master
in 2013 with the then PGM

The October Regular meeting was held under the 'Rule of Six' restrictions at Halsey Masonic Hall, Watford. This follows the cancellation of the Regular meeting under the general suspension that was due to be held in May.

This meeting allowed the Lodge to prepare for 2021 in the hope that we will be able to meet with larger numbers in the near future. Congratulations to Bro. Steve Hewitt, who is now Master Elect for the ensuing year. 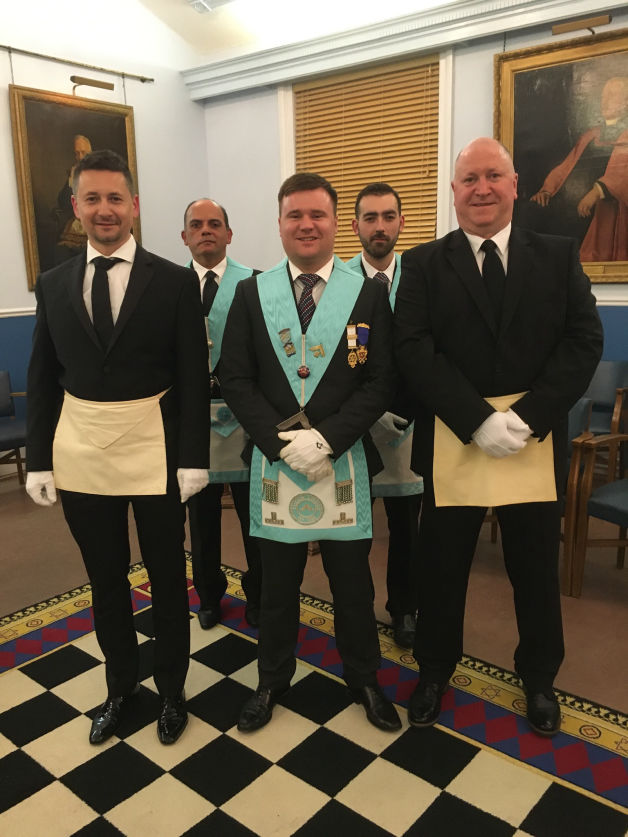 A double Initiation ceremony was held by Tudor Lodge on Wednesday 19th February with the Worshipful Master, W.Bro Will Kane, initiating his father, Bro. Steve Kane, and Bro Lucian Florian. There were forty-four Masons in the Lodge Room and the same number dining afterwards.
The guests were an integral part of the ceremony and the two initiates were treated to the Entered Apprentices Song and Chain at the Festive Board where two more of the guests assisted the Director of Ceremonies, W.Bro Mick Fenner, with the song.
The evening ended at 10.00pm after a good meal, lots of raffle prize winners and a day to remember for all who were there. 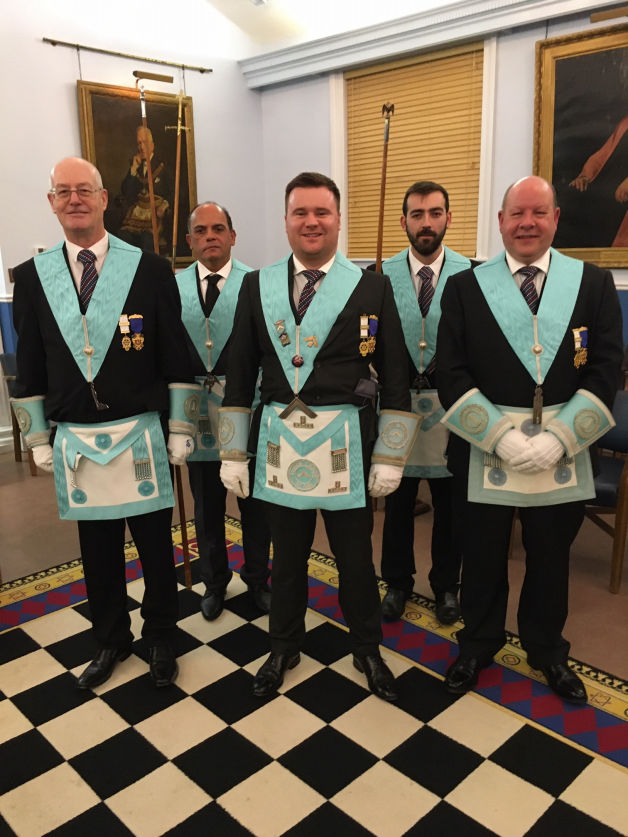 W.Bro Will Kane was Installed as the new Master of Tudor Lodge on 8th January 2020. He appointed his Officer team including his Wardens and Deacons (all pictured) along with his administrative team for the year.
The Lodge was supported by W.Bro Jay Patel APGM, representing the Provincial Grand Master, and 44 masons dined and welcomed W.Bro Will to his new Office.
The Lodge is looking forward to a busy year with two new Candidates to be Initiated at the February meeting and other ceremonies to be held through the year. 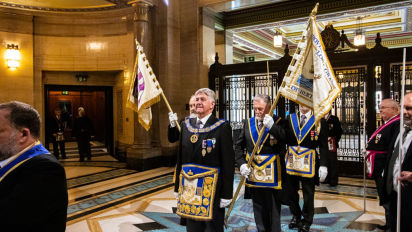 An Announcement from the
Provincial Grand Master

Following the announcements below and due to the coronavirus pandemic, RW.Bro Paul Gower has been asked to stay on as Provincial Grand Master for one extra year, until W.Bro Neil Connolly can be installed in September 2021. 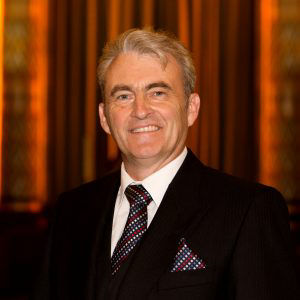 A Message from the Provincial Grand Master Designate

I would like to take this opportunity to thank all of you who have sent me messages of congratulations since the announcement from the Provincial Grand Master. I am grateful for the opportunity to continue serve the Province as your next PGM.
As we know, RW Brother Paul Gower has led our Province in such a manner that has enabled us all to enjoy our Freemasonry and for us to live up to our reputation of "Happy Hertfordshire", it is my intention to continue in this vein in the manner established by him and his predecessors.
Brethren, Freemasonry is at a point where it is important that we develop new strategies to remain relevant in a modern society but also that we do not lose the things that make our Institution unique.
I look forward to seeing you all throughout the remainder of this Masonic year.
Sincerely and fraternally,
Neil Connolly PSGD
Assistant Provincial Grand Master
Provincial Grand Master Designate

Solomon is aimed at three specific groups:
- Those who want to learn more about their masonry
- Those with programme planning or member development responsibilities in a Lodge or Chapter
- Provincial or District Officers charged with promoting and providing learning resources and activities
The materials provided include 'nuggets', short informational pieces for general reading or for presentation in Lodge or Chapter, and Papers for personal study which include quizzes to complete.
To access Solomon go to https://solomon.ugle.org.uk and register to get involved.

In order to secure the future of Freemasonry, one objective of UGLE's '2015-2020 Our Strategy at a Glance' report is to improve the structure for the attraction and retention of members. To deliver on that objective, the Members' Pathway was prepared to provide a structured approach for Lodges to follow in order to attract and encourage potential new members while at the same time retaining and adding value to the existing membership.
The Pathway was developed to address recruitment and development in Freemasonry in order to stem the decline in membership and meet the long-term needs of the Craft and the Royal Arch. Evidence from successful Lodges reveals there is good reason for optimism on Freemasonry's future.
Every Lodge member shares a responsibility for introducing new members, helping in retention and by helping the new recruit feel welcome and then supporting them.
Download a PDF of The Pathway Steps 1-11 to find out more.
LODGE LAYOUTS
The layout of the Lodge may often look the same but can be subtly different in many Lodges. In general, the Lodge furniture is found in the same place but seating arrangements can differ between Lodges and Provinces. While Grand Officers will nearly always sit to the right of the Worshipful Master, the Stewards may sit on different sides of the Lodge. Some Officers will always sit in the same place, especially the Worshipful Master and those Officers in line to the Chair, while others do not have a specific seat.
Download a PDF of the Lodge Layout typically used in Tudor Lodge
FREEMASONRY and THE SIDE DEGREES
Many newer members in Freemasonry may not realise just how many Side Degrees are available once membership of Craft masonry has been gained. While the first Side Degree to be introduced is usually the Royal Arch, others are also available with some dependant on membership of one or more degrees. A table explaining the relationship between the Degrees can be downloaded below.
Download a PDF diagram of Freemasonry and the Side Degrees

The Tudor Lodge Banner was dedicated in a ceremony held on Saturday 13th July 2013, celebrating the 60th anniversary of the Lodge. Presiding over the Provincial dedication team was the then Provincial Grand Master, RW.Bro Colin Harris. The Lodge Worshipful Master for the year was W.Bro Wally Instrall who at that time had been in Freemasonry and Tudor Lodge for 57 years. This was the first banner for the Lodge which was generously donated by W.Bro Robbie Biggs who oversaw the design and manufacture from start to finish. The Lodge Room was full to capacity for the occasion and nearly 100 masons dined afterwards to celebrate this milestone in the history of the Lodge. 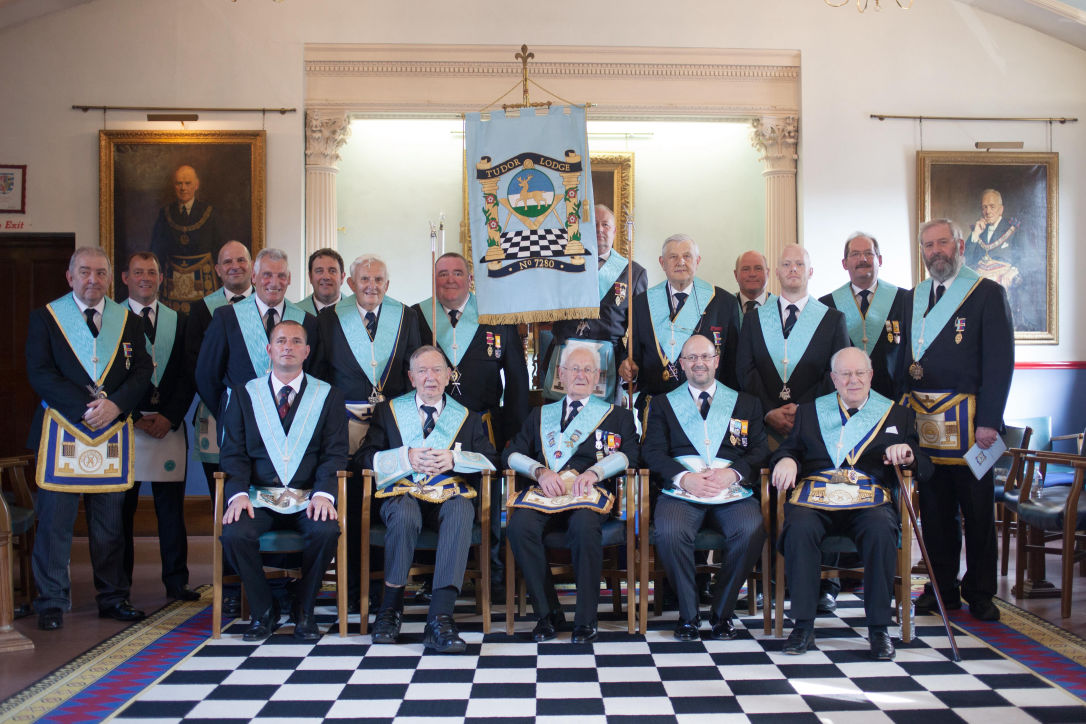 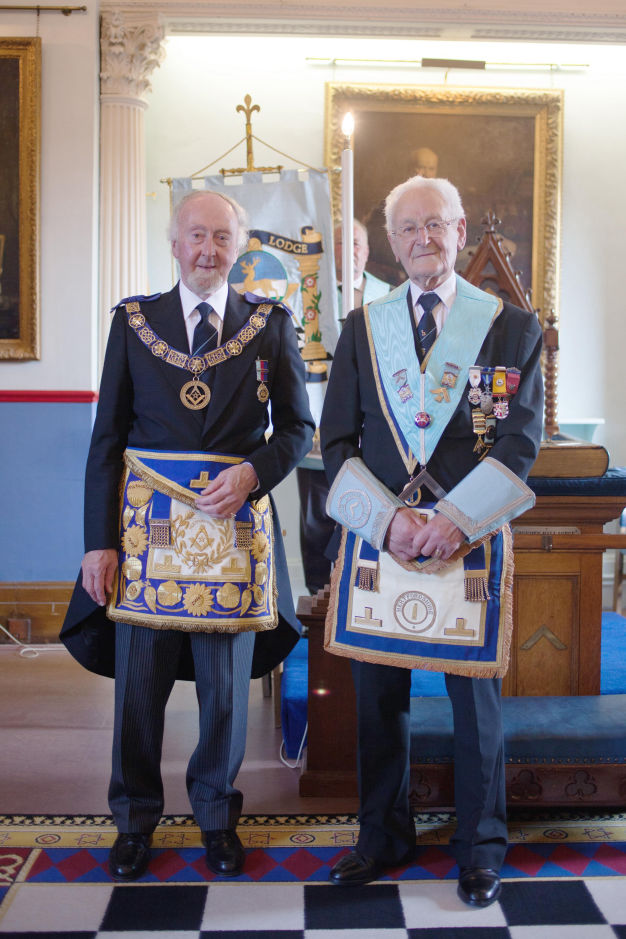 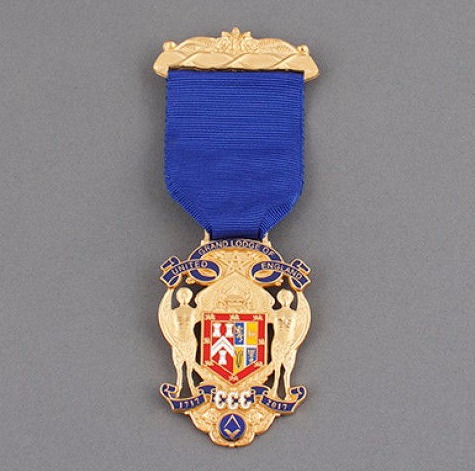 Freemasonry as we know it today was founded in 1717. On 24th June 1717 four established London Lodges came together at the Goose and Gridiron Tavern in St Paul's Churchyard and declared themselves a Grand Lodge. This was the first Grand Lodge in the world, and it is the Tercentenary of this date that was celebrated in 2017.

On 24th June 2016, UGLE launched a Tercentenary Jewel to commemorate 300 years of Grand Lodge. The jewel may be worn in perpetuity by qualified Brethren at all Craft meetings.

Members can use this Contact Form to send a message to the Lodge Secretary
This includes confirmation of your dining intentions for the next Regular meeting, attendance at LOI and Committee meetings or for general messages